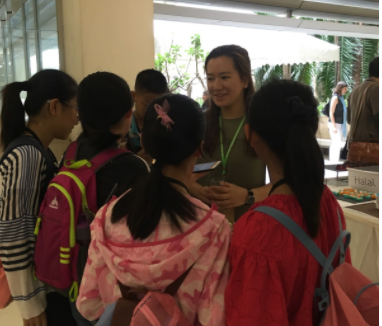 Yes, seriously. I was mobbed by children. A flock of 7-8 wonderful little kids came over to ask if they could do an interview with me. Never have I felt more like a celebrity in my life! The very first question they threw at me was: what is your favourite online game? Truth be told, my mind turned blank and the only thing I could think of was Neopets (anyone?). Hey, that stuff was pretty cool back in 1999.

This is exactly the kind of thing that one can expect from APrIGF. Quite literally anyone – academics, activists, techies, traders, experts, non-experts, nerds, geeks, youth, even children – can come together to learn about internet issues and to build capacity. My one year journey with Digital Asia Hub as Program Coordinator culminated at the APrIGF last week at Bangkok. As a newbie to the field myself, I thought I could share a few observations and takeaways. (Editor’s Note: No, this is not our idea of a birthday present)

The very first friend that I made at the conference was a law student from Malaysia. Our similar education background helped us bond quickly, then I also came to learn that he’s an LGBT activist. It didn’t occur to me that a feminist angle to technology would go beyond the gender pay gap in Silicon Valley or the problem of all-male panels at tech conferences. But as our conversation deepened over beer (I understand this is how all tech conferences work), we started to ponder about online hate speech, and cyber-bullying of women and sexual minorities. Sessions we attended at the conference itself unfolded in-depth case studies around online harassment, such as rape videos of victims in India being circulated online, which took years to be removed due to outdated colonial laws governing obscenity.

One of the most fascinating aspects of the IGF is that it serves as a unique platform to embed discussions of gender, human rights, and other important social issues within sessions on privacy, data protection, and online safety laws. The ability of the conference to pull together people from various backgrounds to explore empirically the cross-cutting ties of online and offline connections is extremely important for activists or policy-makers to do their work effectively.

Another wonderful feature of the APrIGF is the regional angle that it provides. I attended a fantastic session on the Right to be Forgotten. A concept that originated from the EU was being debated amongst panelists from the US, Japan, Philippines, Korea and India, before a highly international audience. It would face challenges in America with free speech concerns under the First Amendment (although they are not totally irreconcilable, according to some scholars). But the real surprise came from Korea’s 2016 administrative guidelines which were designed to be conducive towards content removal: it is closely being observed to assess how far the law can be stretched by celebrities and companies to “cleanse” unsavory information on the Internet on the basis of a right to reputation. A session like this illustrates perfectly that the ubiquity of technology only goes so far as it is entrenched in jurisdictional differences and value gaps. Being the law nerd that I am, the session was refreshing, informative, and made me very happy.

I must also mention the range of organisations represented at the conference, and the wide spectrum of initiatives that they have put forward, both within the main agenda as well as through a set of pre-events and side meetings. For example, Global Partners Digital and the Centre for Communication Governance co-hosted a cybersecurity workshop that discussed roadmaps towards the upcoming GCCS in India (Global Conference on Cyberspace), and the Newcomers Capacity Building Day covered everything from the basics of Internet Governance to Big Data and Artificial Intelligence. My own organisation, Digital Asia Hub, co-hosted a side event with the Centre for Internet & Society, India, exploring the extent to which the Internet has become a vehicle for radicalisation and mobilisation online, and experts’ views about the limitations and/or opportunities of platform providers and technology intermediaries developing automated solutions in the space.

In the IGF, everyone had a role to play and had something to say. I met some of the most earnest conference participants in Bangkok, and learnt much from them. On the whole, for someone who is new to the IGF system like me, the issues discussed were extremely illuminating, multifold, and at times admittedly overwhelming. But meeting so many people and organisations, and seeing what they do on the ground also gave me the strange and very tangible realisation:

The internet belongs to (just about) anyone.

We are all users, and we are all affected by it, even those who currently don’t have access. The broader narrative about technology often dances around tech giants like Tesla, Facebook and Google, and the media often frames these issues in vocabularies that we don’t all understand. But the truth is, we all confront our very own internet realities. Our lives are all squished into tiny gigabytes that we have no escape nor control. It could be cyber-bullying of the kind mainstreamed in 13 Reasons Why that we choose to ignore, or it could be about our frustrations with how slow wifi is sometimes. We are still living under an attitude of neglect: there is a serious asymmetry between macro-narratives in which issues are framed and micro-civil society campaigns, we are still missing the empirical for the anecdotal, and we are consciously ignorant of issues in the Global South while happily having the spotlight on the ‘West’. There is still a lot to be learnt.

So my key takeaway? We should start taking ownership of how the Internet is governed, and we should do it now. After all, the 9 and 10 year-olds are doing it too.

Julianne Chan
Programme Coordinator at Digital Asia Hub
Julianne coordinates the Hub’s activities and operations in Hong Kong, and is an aspiring lawyer and LLB student at the University of Hong Kong. She has previous academic and work experience at law firms and NGOs in Hong Kong, Shanghai, Scotland, the United States and Ghana, and is passionate about engaging stakeholders from diverse backgrounds. Julianne’s three-year experience at AIESEC fuelled her interest in non-profit management and she is keen to build capacity, undertake interdisciplinary research, and enhance the Hub’s presence in local and regional networks and communities.
Latest posts by Julianne Chan (see all)