As COVID-19 quickly spread throughout the world since January 2020, the uncertainty concerning the origins and features of the virus provided a fertile ground for misinformation and conspiracy theories to thrive.

Different from those popular COVID-19 conspiracy narratives in the West, on Chinese social media the conspiracies that gained traction were ones that faulted the US for the origins of COVID-19  (Chen et al., 2020)[1]. For instance, popular theories that American athletes participating in the Wuhan Military World Games brought the epidemic to Wuhan, and that COVID-19 is a bioweapon made by the US, were prevalent on social media. These conspiracies were a direct response to the deteriorating Sino-US relationship (Chen et al., 2020).

Belief in cross-national conspiracy theories not only dampens international relations and decreases public confidence in political institutions and scientists (Plohl & Musil, 2020)[2], but also undermines the motivations to take appropriate protective actions in the current pandemic (Allington et al., 2020)[3]. The COVID-19 pandemic poses extraordinary challenges to public health, and understanding the factors that contribute to people’s beliefs in conspiracy theories is of ultimate importance. Numerous psychological, social, political, and communication factors have been identified to be related to the belief in conspiracies (Douglas et al., 2017[4]; Uscinski et al., 2020[5]). In this article, we explore the question: who believes in COVID-19 conspiracy theories in China?

The data for this study were obtained from an online survey of a  nationally representative sample of Internet users in China. The data collection was contracted out to a commercial survey research company in China and fielded in the period 2-23 March, 2020. A total of 3,000 respondents aged 18 years or above in China participated in the survey, with a response rate of 24.56 per cent. To achieve a representative sample, stratified quota-sampling method was employed to recruit respondents.

A big battery of questions, including belief in COVID-19 conspiracies, knowledge about COVID-19, negative emotions, media exposure, and value orientations were asked in the survey. Belief in COVID-19 conspiracy theories was assessed by examining respondents’ belief in two popular conspiracy theories in China (0=false, 1=true). Knowledge about COVID-19 was measured by four questions related to popular misinformation regarding COVID-19 in China. Each correct response is counted as 1 point and the maximum score is 4. Media exposure was measured by asking respondents to indicate their frequencies of using four types of media outlets to obtain information (1=never, 5=always): government media (e.g., People’s Daily, CCTV, etc.), market oriented media, WeChat, and Weibo. Negative emotion was measured by asking respondents to rate the levels of ‘sadness’, ‘fear’, ‘anger’ and ‘shock’ in response to the pandemic, ranging from 1 (strongly disagree) to 5 (strongly agree). Respondents who scored above 3 were categorised as having high levels of negative emotion and others were coded as having low levels of negative emotion. Value orientation was measured by asking respondents’ attitude toward traditional culture ideas and practices (e.g., confucianism, herbal medicine, feng shui). Respondents were categorised into a high support group if their average scores were above 3. Demographic features including age, gender and education level were also measured in this study. 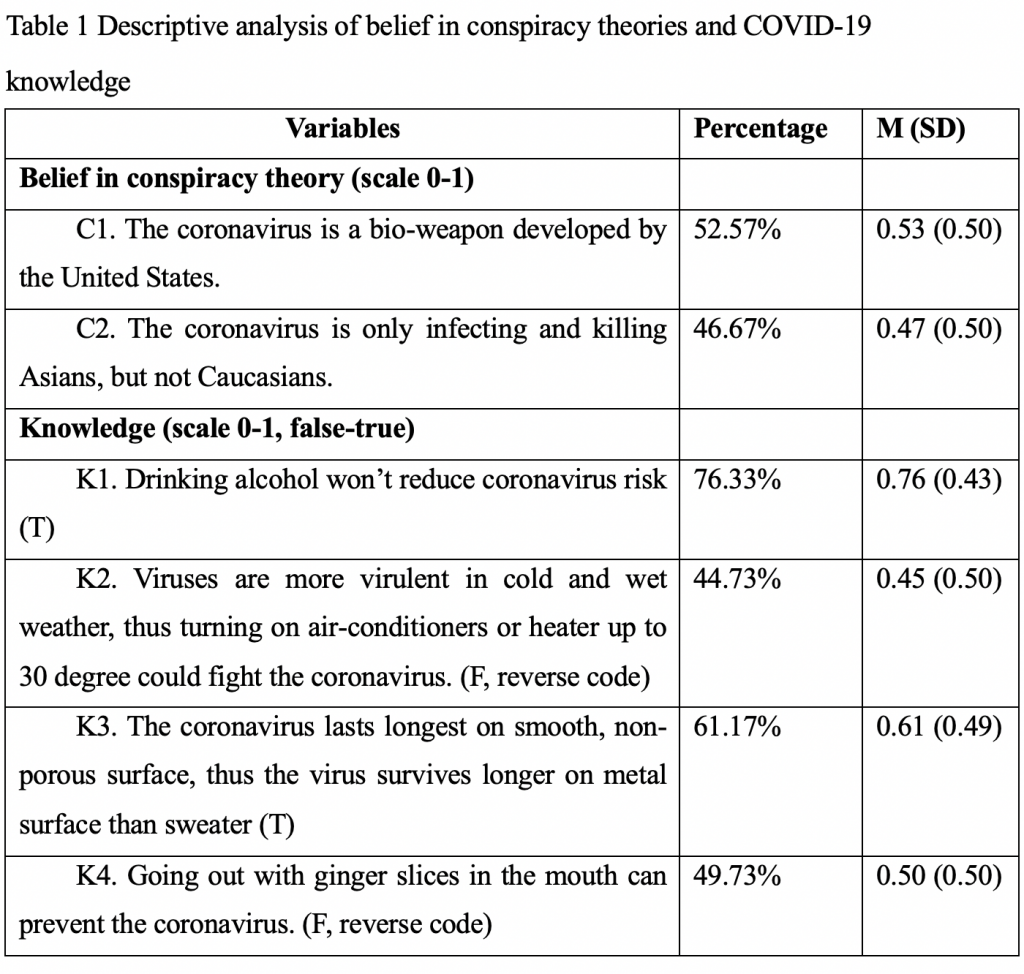 The aim of this article is to explore who believed conspiracies in China. Overall, we found that demographics, media use, knowledge, negative emotion and value orientations are all strong predictors of beliefs in conspiracies.

We found positive relationships between negative emotion, traditional values and beliefs in conspiracies. This shows that the spread of conspiracies was mainly driven by strong affective factors (e.g., fear, value orientation). The data also shows respondents who had high levels of knowledge tend to be less vulnerable to conspiracies. But, there was a pretty high threshold for “knowledge” to alleviate belief in conspiracies. People who answered one or two questions correctly were not very different from those who did not answer any questions correctly. Interestingly, conspiracies are more popular among young people in China. The reason behind could be the recent rise of nationalism among young Chinese individuals (Li, 2019 [6]; Han, 2019 [7]). Finally, we found more exposure to government official media was negatively related to beliefs in conspiracies while the use of Weibo and market driven media becomes a contributing factor to higher levels of belief in conspiracies. One explanation could be the specific approach the Chinese government took to fight the virus. Once the health crisis was officially recognised to be a pandemic,the Chinese government took swift action to disseminate messages about preventive measures and issue misinformation correction on a daily basis. Although a Chinese foreign ministry spokesperson spread speculation via Twitter that the origins of the virus  might be linked to theUS army’s participation in the Wuhan Military World Games in 2019  n (a move that may be seen as an attempt to fight back against the anti-Chinese conspiracy theories propagated by  US president Donald Trump) [8], the domestic Chinese media focused on reporting confirmed cases, death doll, and preventive measures more.

Some cautions should be considered in interpreting our findings. First, after the outbreak of COVID-19, there was a massive amount of conspiracies spread on Chinese social media. But only two conspiracies were tested in this study, different findings might arise for other types of conspiracies. Second, the data used in this study were collected after the rising phase of the virus outbreak in China (and before the sharp rise in cases in Italy and other regions in the West)–the psychological and behavioral responses to COVID-19 could be different at other time points. Third, our study merely focused on internet users in China, and extra caution is needed when generalizing these findings to the whole Chinese population.

Countering conspiracy theories and disinformation related to the pandemic is an important part of pandemic containment effort and data from this study shows that Chinese media is not immune to the spread of conspiracy theories. As some countries start to introduce COVID-19 vaccines to the public, prompting an increase in vaccine related conspiracy theories, this challenge remains.

Our data suggests market based media and social media platforms need to pay more attention to content management and be more aware of their role in propagating conspiracy theories that may lead to belief in health misinformation and worsening public health outcomes.

[7]. Han, R. (2019). Patriotism without state blessing: Chinese cyber nationalists in a predicament. In Handbook of protest and resistance in China. Edward Elgar Publishing.

[8] Molter, V., & Webster, G. (2020). Coronavirus conspiracy claims: What’s behind a Chinese diplomat’s COVID-19 misdirection.
This was written exclusively for Digital Asia Hub as part of an on-going series ‘When The Music’s Over’ where we parse and reimagine the evolving post-COVID19 landscape. The series is in partnership with the Global Network of Internet & Society Centers and Konrad-Adenauer-Stiftung.

'Chris' Fei Shen
Associate Professor at Department of Media and Communication, City University of Hong Kong
Dr. Fei Shen ('Chris') is a keen observer of the social and political impacts of new media technologies. His empirical work examines how people make use of new media technologies in different settings and how the internet helps reshape people's behavior and redistribute power in societies, in particular, in authoritarian regimes. He wrote extensively on the topic of the internet and China: online political discussions, opinion climate in the cyberspace, the Great Firewall, censorship patterns of news portal sites, circumvention tools use, and ordinary citizen running social media campaigns for local congress elections, etc. He has published articles in such journals as Communication Theory, Journal of Communication, Communication Research, the International Journal of Press/Politics, and International Journal of Public Opinion Research.